Creeping Waves is once again available on Amazon in paperback. I thank me for my patience. Such as it was.
Posted by Matthew M. Bartlett at 5:28 AM No comments:

I've updated the file to eliminate a few typographical errors. Meantime, you can get the book on the Muzzleland Press site, and the electronic version is still available on Amazon. The paperback should be available again on Amazon soon.

Not soon enough for me. Thank you for your patience.
Posted by Matthew M. Bartlett at 11:02 AM No comments:

A lot has happened since I last updated. I feel like the friend who'd said he'd call, and then a week went by, and then three weeks, and then months, and suddenly it's too late to call. The damage is done. I'm a heel. The friendship is irreparably damaged.

Ah, but that's not really true, is it? Let's catch up. At the end of January I was honored to be one of the readers at the Lovecraft Arts & Sciences Council, along with the estimable Paul Tremblay and John Langan, and others.

Here's the video. I need to lose weight!

Prior to the reading, a bunch of us ate at one of Providence's Korean restaurants (I forget which). During that meal, Sean Thompson said something funny, causing me to spit soup onto him, onto Matthew Warren Richey, and onto John Langan. I'm going to stick with blaming Sean. In any event, the Lovecraft Arts & Sciences Council is my favorite place to read. It's a beautiful shop in America's oldest (and surely prettiest) malls. Would that all malls were like that.

In April I drove down to Krallcon in a terrible rainstorm that followed me down through Massachusetts, into Connecticut, over the goddamned Tappan Zee Bridge, and right into Jersey. I was the guest of honor, which means there were speeches about me. That's weird. If you ever get the opportunity to be a guest of honor at a thing, I suggest you do it.

I met Jordan and his wife (the latter is a masterful player of Words With Friends). I met Nick Cato and Christopher Ropes, lovely chaps. I met Brian O'Connell, a Weird Fiction prodigy and a very good guy. His dad did some filming. Videos from (and shown at) the event:

Oh, Creeping Waves came out. This is a follow-up to Gateways to Abomination, almost a sequel, though it can be read independently of its predecessor. I've been begging people to buy it; soon I'll switch over to asking for Amazon reviews to put the book in front of more potential readers. The book boasts a gorgeous cover by Nick Gucker and a terrific introduction by Nathan Ballingrud. The publisher is Muzzleland Press, and you can buy the book (fuh cheap!) at the link.

So, what's next? Here's a list, to the best of my Saturday morning hazy recollection:

- In June, two stories, "If He Summons His Herd" and "Where Night Cowers" will be published in the radio-themed anthology Lost Signals from Perpetual Motion Machine Publishing.
-Also in June, my story "The Terrible Old Friend," a Lovecraft homage with a wink, will be published in the inaugural issue of Ravenwood Quarterly.
-In the Fall, my story "No Abiding Place on Earth" will appear in Nightscript Vol. 2.
-Also in Fall, and here is something that still wakes me up with happiness in the middle of the night, my story "Rangel," originally published as a chapbook by Dim Shores, will appear in the third volume of Year's Best Weird Fiction.
-Some time in the near future my story "The Rats on LePaul" will be published in Dunhams Destroys Lovecraft. It's a bit of a satire with a touch of bizarro.
-December will see the publication of "The Stay-Awake Men & Others," a limited hardcover from Dunham's Manor Press. This is a more traditional collection of short stories. There will likely be a non-limited version in the future.

Otherwise, I'm still writing stories. That's all for now. It's time for me to shower and head over to the Bluebonnet for my traditional Saturday morning meal: three eggs over medium, cripsy bacon, white toast (or a grilled English Muffin if I'm feeling continental), home fries, cranberry juice, and coffee. 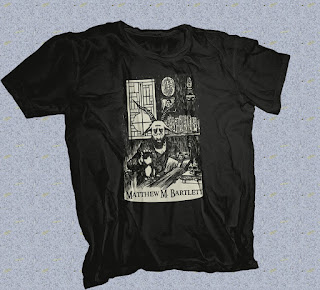