I have a new record out, from Cadabra Records, called Mr. White Noise. Featuring stories from "Of Doomful Portent," the record's music is performed by the estimable Black Mountain Transmitter, with brand new liner notes and gloriously grotesque artwork by Aeron Alfrey. 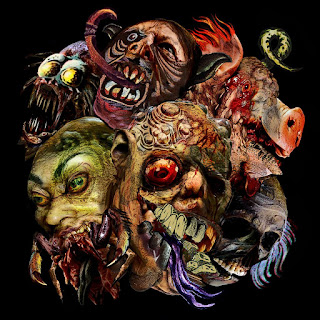 There are, as of right now, just three copies left. Purchase yours HERE!!!
Posted by Matthew M. Bartlett at 6:41 AM 3 comments:

Buy my new limited edition chapbook If It Bleeds, and support the Dakin Humane Society.

A toe-tapping track from way back spreads like a virus through Leeds, Massachusetts, heralding a new era of unspeakable evil. WXXT - the slithering tongue in the ear of the Pioneer Valley. Are you ready to rock?
Posted by Matthew M. Bartlett at 3:01 AM 4 comments:

This worthy project is nearing its deadline, and nearing its goal. You can help! One of the rewards is an ultra-rare chapbook of my story Dr. 999.

An Unsafety Guide by Scott Nicolay

Author, World Fantasy Award winner, and friend Scott Nicolay kindly agreed to write the introduction for my short collection The Stay-Awake Men & Other Unstable Entities. I couldn't be more pleased. Without further ado, then:

Bartlett and You: An Unsafety Guide
An Introduction by Scott Nicolay

Posted by Matthew M. Bartlett at 1:31 PM No comments: 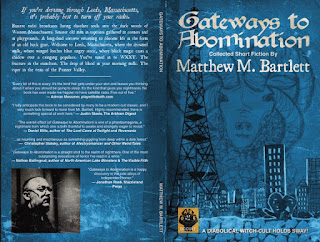 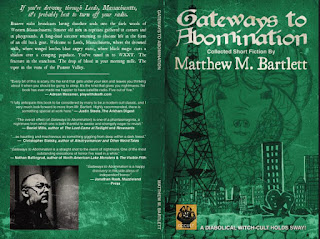 Gateways to Abomination: Special new cover design and colors. New interior. $12.00 each includes shipping and handling. $21.00 inclusive for both. PayPal to matthew.mark.bartlett (at) gmail (dot) com. Where PayPal allows you to include a note, indicate whether you want the green or blue edition.
***I WILL NOT BE SHIPPING UNTIL THE END OF JUNE AT THE EARLIEST.***
Contact me re: international shipping.
Posted by Matthew M. Bartlett at 8:40 AM 4 comments:

I have a new Patreon. See how to get exclusive content at the link.
Posted by Matthew M. Bartlett at 4:57 AM No comments:

All donated funds go towards my paying for cover art, proof copies, formatting, etc. for my self-publishing projects. They help me keep working.

Click the link to donate: https://ko-fi.com/matthewmbartlett
Posted by Matthew M. Bartlett at 10:39 AM 4 comments:

STORY NOTES - Carnomancer, or The Meat Manager's Prerogative, from The Stay-Awake Men & Other Unstable Entities

In Vernon, Connecticut, in an L-shaped plaza set off a bit from a smaller L-shaped plaza (they formed a kind of a box around a Denny's where I spent a lot of time, mainly ordering the two-egg breakfast with fries, joking around with my brother and our friends, and bothering an older, put-upon waitress with the unlikely name of "Kitty"), there was a supermarket, like any other shopping plaza supermarket. At the front, on the right as one walked in, they had put up framed pictures of their department managers. The meat manager looked absolutely deranged, so much so that kids tried constantly to steal the framed picture. It was like a copy of the Satanic Bible at a Waldenbooks; I'm surprised they didn't put it behind the service desk for safekeeping. I don't know if the kids ever succeeded. I would pay good money to have that to hang up in my office.

Sadly, I have no memory of what the man looked like.

I'd wanted to write a story about a mysterious or deranged meat manager for a while. I knew only one thing: I wanted to steer clear of any hint of cannibalism. It seemed to me too trite a topic, at least for this particular story. People might expect it.

One day I was visiting my grandmother down in West Hartford, and I saw a street sign that said FOXCROFT. What a wonderful name. It stuck in my head (like a bone-in steak?). Later that day, I passed a truck that said LAFOGG on the side.

The title "Carnomancer" came to me out of the blue. So, between the supermarket portrait, the two names, and the title, I set out to write Carnomancer. My "research" consisted of scoping out the meat departments of various supermarkets (sticking my head over the wall, basically, and looking at the work areas), asking some questions of Facebook friends who'd worked at supermarkets, going to a local psychic, and scoping out a really terrible local Spirituality shop. The same shop, incidentally, had somehow mistakenly charged someone else's purchase to my credit card a few years back. I also looked at a ton of pictures of psychic's shops online. As one does. And I looked up meat terms.

I also used as a character - the dancing man LaFogg sees from his bedroom window - a local man I see from time to time, heavy-set, bearded. While I was in the middle of writing the story, I saw him dancing in the rain on a street corner. It was sort of beautiful in a raggedy way, and perfect for the story.

The sort-of-twist ending to the story was something I wrestled with. It felt too neat, too "clever." But I couldn't shake it. I ended up keeping it. For better or for worse.

The Stay-Awake Men & Other Unstable Entities is available here in a limited edition hardback with a cover by Dave Felton colored by Steve Santiago, and three interior illustrations by Felton. Fewer than 30 copies remain.
Posted by Matthew M. Bartlett at 4:38 AM 3 comments: